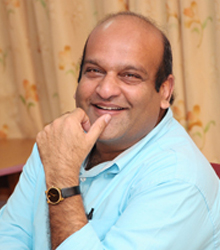 Sri K.V. Vishnu Raju began his career as a Chemical Engineer in M/s. E.T. Dupont De Nemours, USA, from 1989 to 1991, wherein he looked after research and development in polymers, ceramics and adhesives. He returned to India in 1992 and served as Executive Director for M/s. Raasi Cement Ltd., Hyderabad from 1992 to 1995. The following year, he was promoted as Joint Managing Director of M/s. Raasi Cement Ltd., and served the post till April 1998. In December 1999, he took up as the Managing Director of M/s. Anjani Portland Cement Ltd., Hyderabad. Sri. K.V. Vishnu Raju is the grandson of the Founder Chairman, Padmabhushan Dr. B.V. Raju. He is an ardent follower and admirer of his grand father. With the demise of the Founder Chairman, he succeeded Dr. B.V. Raju, as the Chairman of Dr. B.V. Raju Foundation and Sri Vishnu Educational Society in June 2002.

Sri K.V. Vishnu Raju was born on 31 st January, 1964. At the age of four, he was taken to England by his parents, where his father was a doctor.He had his primary schooling at U.K. When he was six years old he came back to India to be brought up by his grand parents. He continued his schooling in Ooty and then in New Delhi. He studied X th in Little Flower School, Hyderabad and Intermediate in Little Flower Jr. College, Hyderabad. He completed his graduation in Chemical Engineering at REC, Trichi and his Post Graduation at Michigan Technological University, U.S.A.