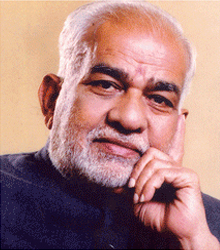 Dr.B.V.Raju a Septuagenarian coming from a humble agricultural family of Kumudavalli Village near Bhimavaram, W.G.Dist of Andhra Pradesh, was graduated in Chemical Engineering in Benaras Hindu University and also in Management from Harvard University of U.S.A.He started his career as a low-grade worker in the cement industry and rose to the level of Chairman and Managing Director of Cement Corporation of India, a Govt. of India Undertaking. He contributed for the industrialisation in India by setting up major cement factories at Mandar, Akhaltara and Neemuch in Madhya Pradesh and at Adilabad, Tandur, and Cuddapah in Andhra Pradesh and at Rajban in Himachal Pradesh, at Bukajam in Assam and at Kurukunta in Karnataka. He was also advisor to State Governments of Tamilnadu, Kerala, Orissa, Uttar Pradesh, West Bengal etc., to set up Industries.

He is a doyen of the Cement Industry and was an industrial adviser to several countries like Sri Lanka, Malaysia, Bangladesh, Indonesia, Nepal, Bhutan etc. After retirement, he promoted several industries in A.P like Raasi Cement, Vishnu Cement, Raasi Refractories, Raasi Ceramics, Telangana Paper Mills, Raasi Software, Raasi Finance & Investment Limited etc. In due Recognition of his contribution for the industrial sector in India, he was awarded with "PADMASHRI" in 1977 and "PADMABHUSHAN" in 2001 by the Govt. of India., and was awarded "DOCTORATE" by Jawaharlal Nehru Technological University, Hyderabad. Both the B.V.Raju Foundation and Sri Vishnu Educational Society are the culmination of his vision, Inspiration, conscious effort and wealth to help the Society, particularly the Poor and Needy.